ANIMAL SACRIFICE IS A BEAUTIFUL LOAN TO ALLAH (SWT) 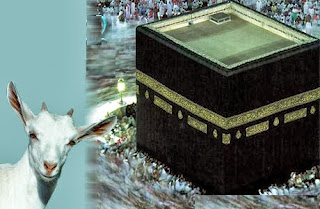 Allah (swt) says in the Holy Quran:
“Who is he that will Loan to Allah a beautiful loan? for (Allah) will increase it manifold to his credit, and he will have (besides) a liberal Reward”. (TMQ-57:11)

Initially this verse comes as a surprise to us and it leaves us wondering that why would Allah (swt) need a loan from us. After all, one of the beautiful, 99 names of Allah (swt) is Ya Samad which means -The Self-sufficient. Definitely Allah (swt) is independent of His Creation and his entire Creation depends on Him for their needs. So why would someone who is Omnipresent, Omniscient, Omnipotent need a loan from us? Well, if we delve deeper into the meaning of this verse then we may realize that Allah (swt) is showing generosity by asking us for a loan from the wealth he has bestowed upon us. Allah (swt) seeks unity, brotherhood and compassion amongst us. Therefore, He has asked us for a loan, which He does not need for Himself, but for the downtrodden people, so that equality and peace may prevail in the society.
So, whenever we decide to offer an animal sacrifice for feeding our poor brethren, we should remember that we are, in fact, offering a goodly loan to our Creator. This is surely a virtuous task and Allah (swt) has promised us that He will not only pay us back manifolds but He will also offer us a Reward. So this would surely be a great bargain for us where our investment will provide us not only rich dividends but also a prize.
Here is a hadith which is related to the above mentioned Quranic verse:
Reported Hazrat Abdullah bin Masud, when this verse was revealed and the people heard about it from the Holy Prophet (pbuh), Hazrat Abud-Dahdah Ansari asked, ‘Oh Allah’s Apostle (pbuh), does Allah want a loan from us?  The Holy Prophet said: Yes, O Abud-Dahdah. Abud-Dahdah said, ‘Kindly show me your hand. The Holy Prophet extended his hand towards him. Abud-Dahdah took his hand into his own and said, ‘I give away my garden in loan to My Lord. Hazrat Abdullah bin Masud says that the garden had 600 date palms and his house also in which his family lived. After saying this to the Holy Prophet (pbuh) he went straight back to home and he called out to his wife, “Come out, O mother ‘O mother of Dahdah, I have loaned this garden to my Lord’. She replied, ‘Dahdah’s father, you have made a good bargain!’ She immediately vacated and left the garden with her effects and children’. (ibn Abi Hatim).
This incident throws light on the strong faith which the people possessed during the times when Islam was in its infancy. They did not hesitate in parting with their wealth because of their strong believe in Allah (swt) and His promise. We should also take a clue from such pious Muslims and thereby, we should not hesitate in parting with some of our wealth. Feeding our poor brethren with a goat or a cow is a noble deed which will eventually help us tide over every crisis in the life, Hereafter. After all Allah (swt) has promised to reward those who spend in His Way!