THE SIGNIFICANCE OF ANIMAL SACRIFICE IN ISLAM 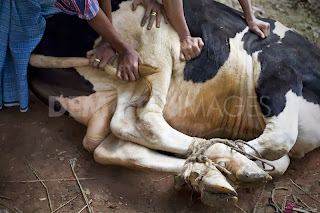 In this post I shall discuss the importance of animal sacrifice in the light of the Holy Quran and the hadith.
We have often heard about the grains which are hoarded by the government. More often than not such grains become rotten because of being poorly stored. The wealth which is hoarded by the affluent is quite similar to such rotten grains, which instead of being distributed amongst the poor often end up getting rotten in the granaries. The wealth of the affluent people which is not shared with the underprivileged sections of the society for earning the Goodwill of Allah (swt) can also be compared to a stagnant body of water such as a pond. Without any flow in the water the water gets murky and it stinks. On the other hand, the wealth of a person who shares it with those who are needy is akin to a river which always keeps flowing and is fresh. Giving sadqa is considered to be a means of purifying one’s wealth in Islam. This implies that if sadqa is not given by a wealthy man as Commanded by Allah (swt) then his wealth is impure because it retains the share of the poor.
According to a hadith it is related from Asma bint Abi Bakr that she went to the Prophet (pbuh) and he said, ‘Do not be retentive or Allah will be retentive in respect of you. Spend as much as you can”. This hadith makes it clear that if a person shows miserliness instead of generosity towards the downtrodden people then he is sure to face the Wrath of Allah (swt). His disobedience ay make him lose Allah (swt)’s Bounty. In a bid to save some bucks he will lose out on Allah (swt)’s Mercy, which is priceless.
Allah (swt) says in the Holy Quran-3:180,
“And let not those who (greedily) withhold what Allah has given them of His Bounty, ever think that it is better for them. Rather, it is worse for them. Their necks will be encircled by what they withhold on the Day of Resurrection. And to Allah belongs the heritage of the heavens and the earth. And Allah with what you do is fully acquainted.”
This Quranic verse makes it clear that for those who are wealthy yet stingy, the noose of hoarded wealth will be tightened around them, on the Doomsday.
So, if we our fortunate enough to have been blessed by Allah (swt) with wealth then it is our foremost duty to obey Allah (swt)’s Command and give sadqa to the poor. Making an animal sacrifice would be an ideal gift to the deprived people who cannot afford to eat mutton for the whole year. Such less fortunate people eagerly wait for the occasion of Eid-ul-Zuha so that they can eat some good quality mutton which the rich distribute amongst them. Giving a sadqa of a goat or a cow to feed such deprived people once in a while will help us please Allah (swt) and get a great reward from Him. This would surely be a dividend-rich investment in which we will be getting the returns not only in this life but also in the life, Hereafter.